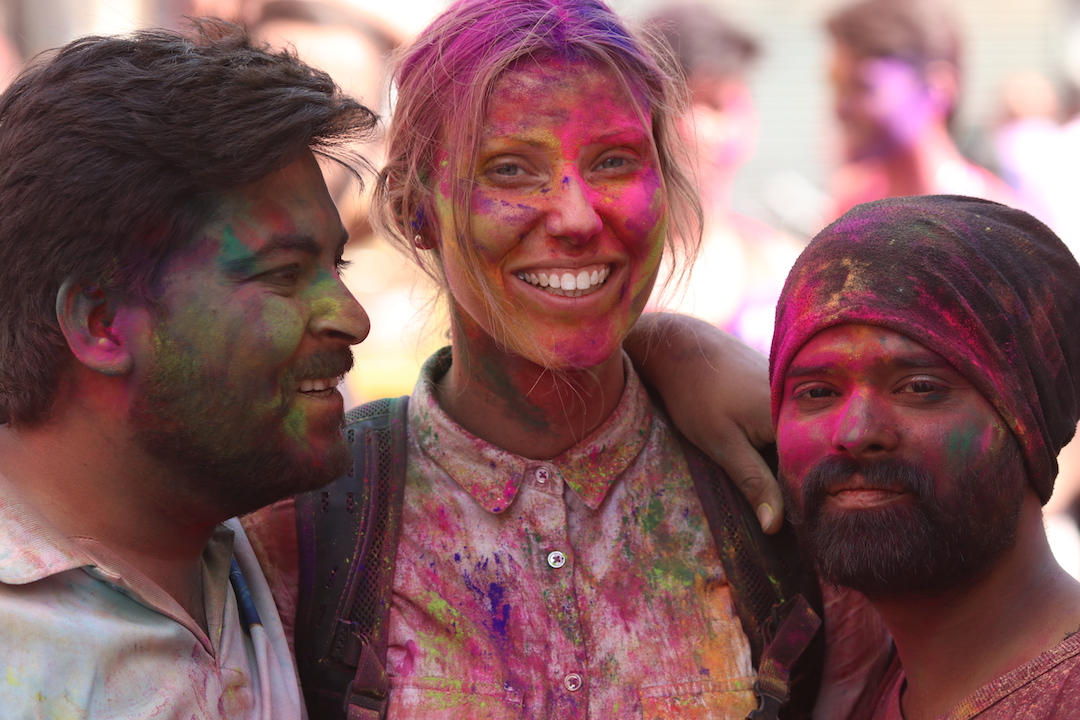 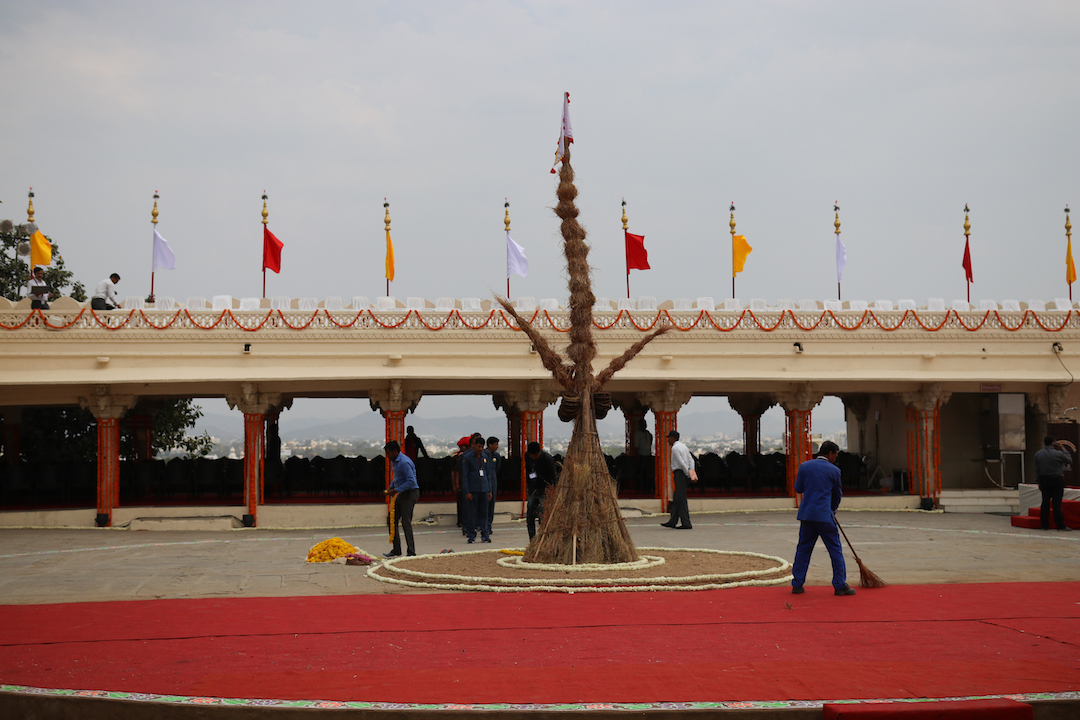 Celebration starts on the Holi eve – everyone is dancing, singing, spending time with friends and family. However the real fun starts the next morning. People hit the street armed with Holi powder, which comes in all sorts of brightest colours. As soon as one meets someone, they grab a generous fistful of powder and put it all on the person’s face while shouting ‘Happy Holi!’ The other person does exactly the same. 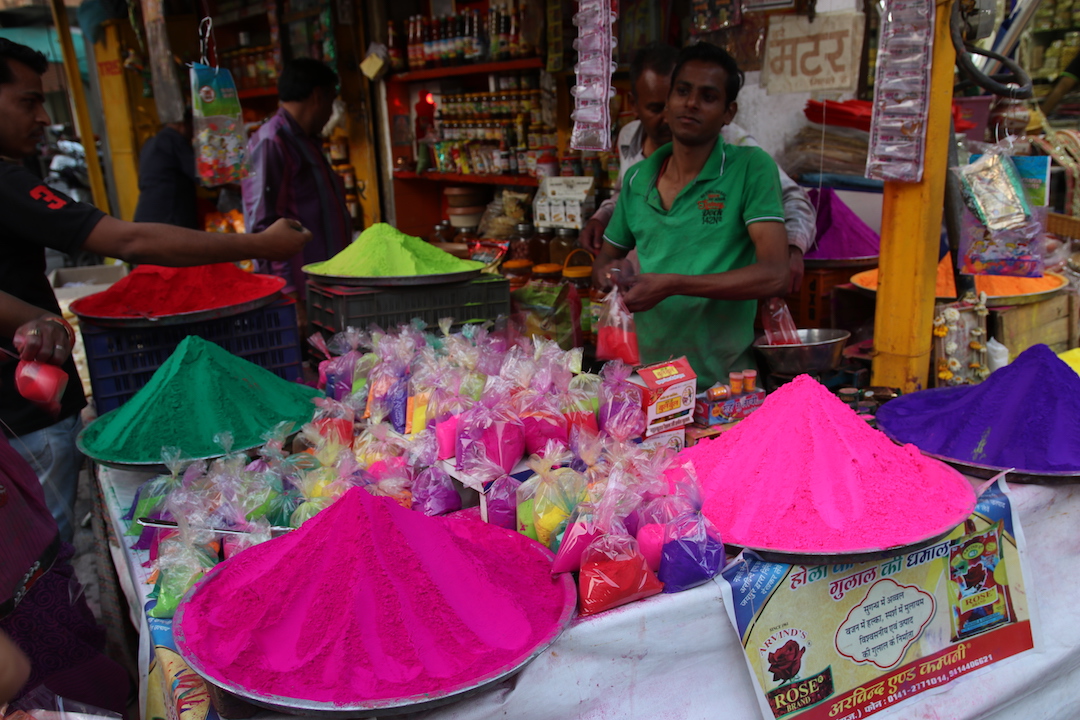 For a very long time Dovydas and I couldn’t decide whether it’s a good idea to participate in this madness. We asked a lot of locals if this would be a good idea or not. To our surprise most of them said they never celebrate Holi (or as they say play Holi) in the street. Instead they choose a much safer option and do it only with their friends and family in their private gardens knowing that nothing bad can happen to them. We weren’t quite convinced that it would be the same to do it with only one family, we decided to look for more information on the internet. Most of the foreigners who have participated said it’s a once-in-a-lifetime experience. However everyone warned that one should be careful as it is acceptable to stretch the social boundaries. 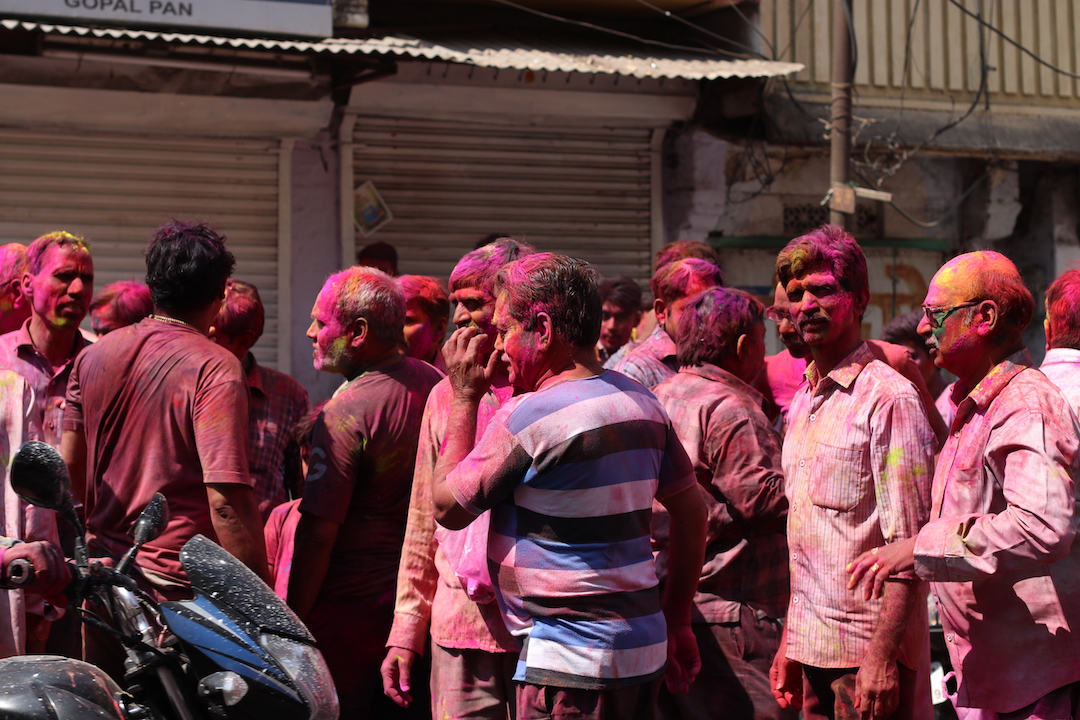 Many people get drunk, many people drink bhang lassi – a yoghurt drink made with marihuana powder. A lot of young boozy guys are wandering in small gangs. And even though we heard all these bad things about Holi, we couldn’t help but try it for ourselves. 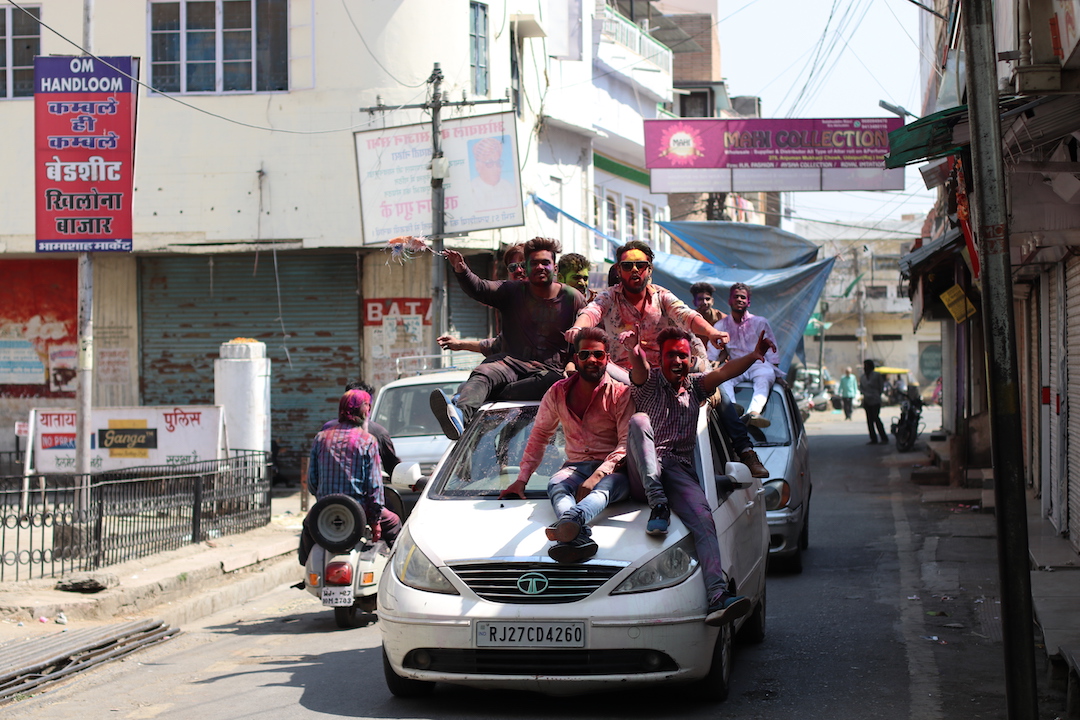 We got ready much later than we had planned. It’s advised to go quite early as in the morning people still are quite well behaved and not drunk. When we left the safety of our hotel we were walking quite sheepishly. Especially when we saw people covered in colours from head to toe zooming past us. 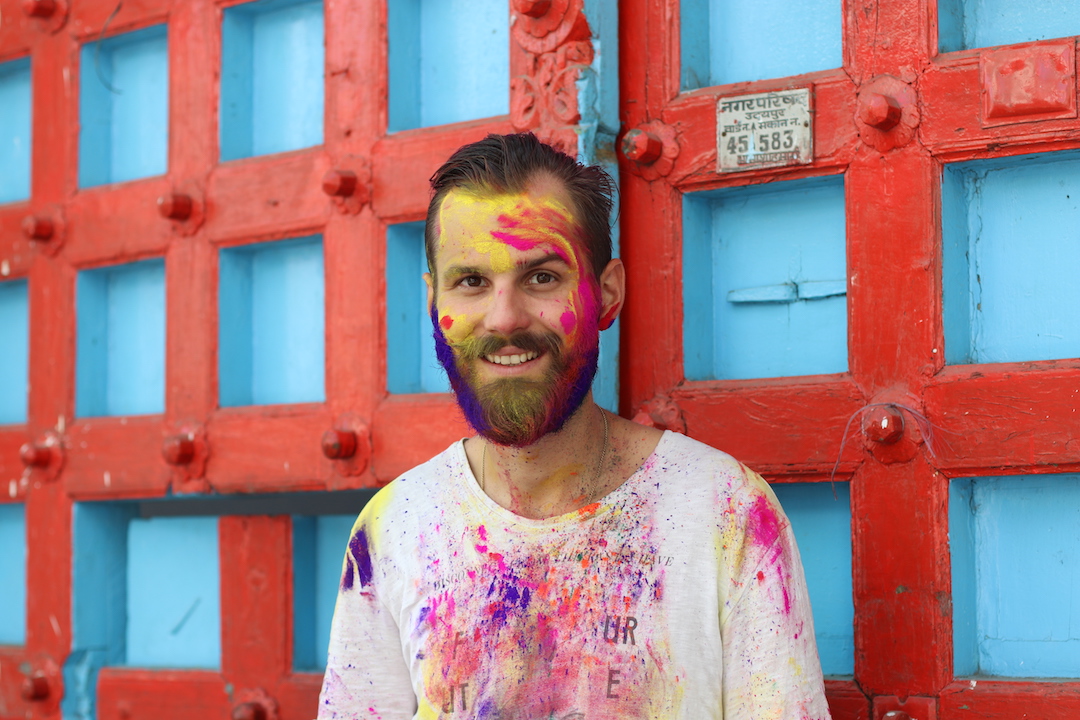 The first person who put colours on us was the guy working in the small restaurant where we used to go for breakfast. He was drunk but very happy that he had a chance to play Holi with us. After our initiation somehow we mustered our courage and with colours and smiles on our faces we went to look for more adventures. After no more than fifteen minutes of wandering around the city there was no space without colour left on our faces. I think the reason to that were extremely excited locals who wanted to play Holi with tourists. 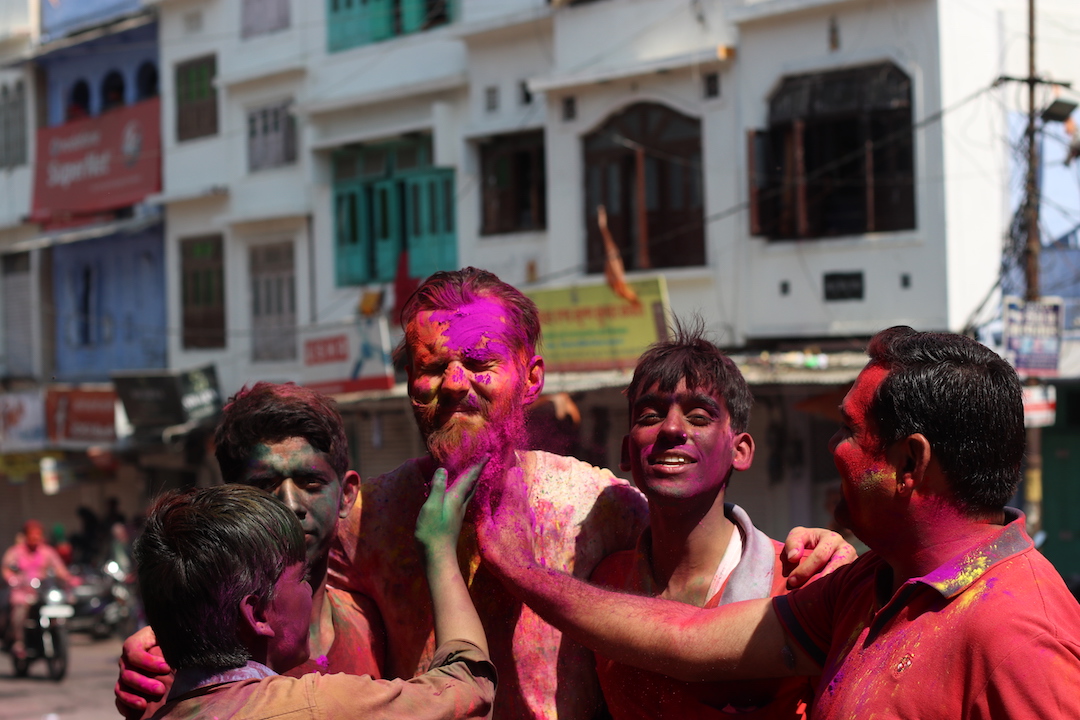 The whole Udaipur was in a mild chaos. People roaming the streets in little groups or in pairs, buzzing on scooters or on the rooftop of the cars – people everywhere, shouting and signalling, making so much noise. Kids like crazy running around armed not only with coloured powder but water bombs too. As soon as someone meets their friend they’d chuck a generous amount of powder without mercy. Looking at the crowd you could see the big coloured cloud hanging above people’s heads. 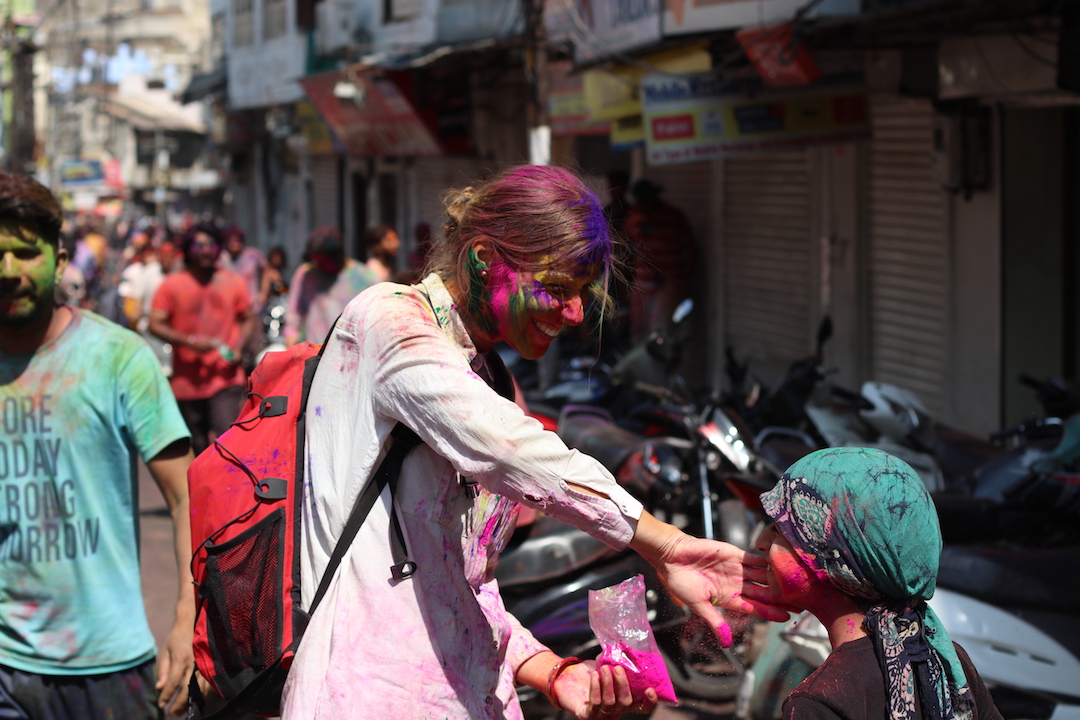 After few hours of playing Holi we decided enough’s enough and started heading back to our hotel. We were warned that unpleasant thing might happen but on our way we were discussing that Holi isn’t as bad as some people say, we had so much fun. And everyone who is visiting India at that time should experience it at least once. Which is plenty if you ask me. 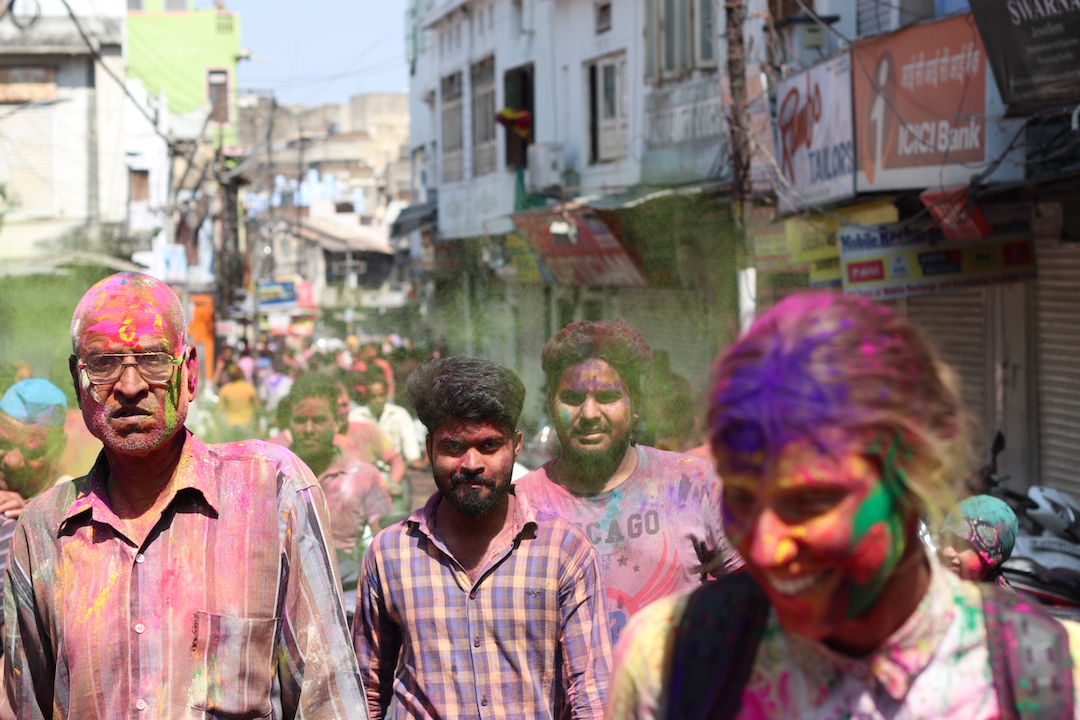 But it ain’t over till the fat lady sings. We were passing a gang of kids. To our disadvantage they had not only powder but small bags filled with water too. A few were brave enough to look us in the eye and throw some of the water bombs just under our feet. We wished them good Holi and very politely asked not to do it again. They smiled and we understood it as agreement. But little did we know. As soon as we turned our back to them they threw few of the bombs at my back. I’ve got quite angry but quickly decided that couple of water bags and a wet back shouldn’t ruin the whole day for me. 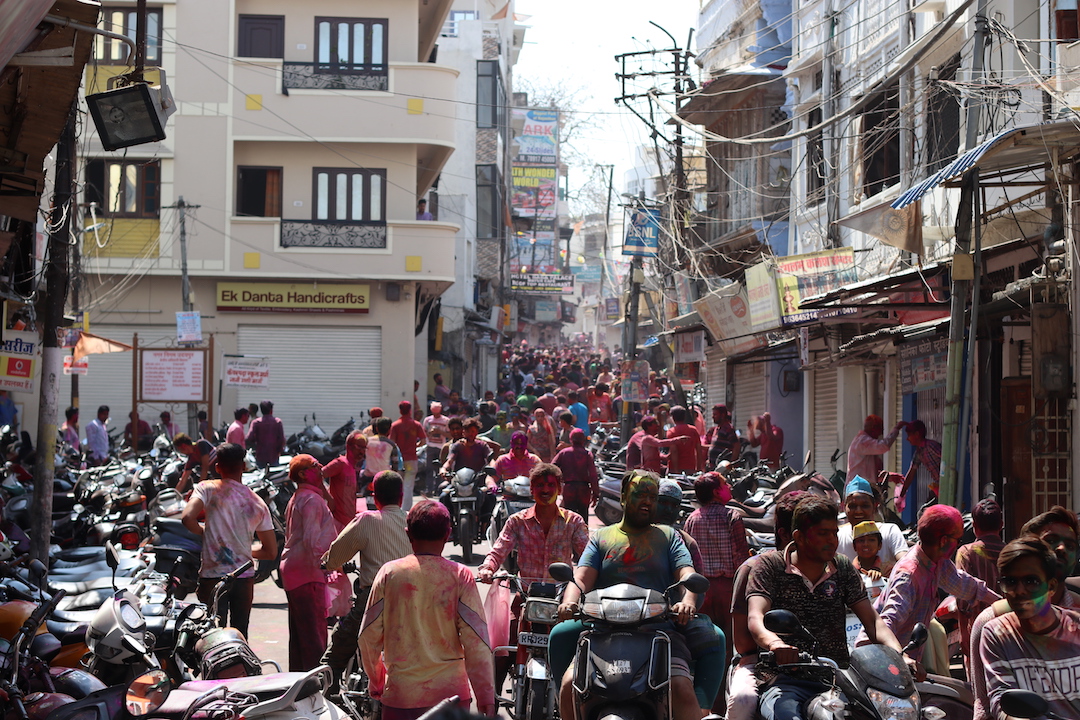 But if we thought this was it, we couldn’t have been more wrong. While walking down the street Dovydas saw something and suddenly stopped to take a picture. While I was waiting for him on the side of the road, just out of nowhere the whole bucket of water was poured on me. I froze for a few seconds. I was soaked from head to toes, water dripping from my clothes and hair. I lifted my head and saw a bunch of kids on the rooftop of the building I was standing by. With the buckets in their hands their were giggling. Never knew that I know so many swear words.. I was furious. I thought I will explode any second from all that anger. Dovydas tried to calm me down but I didn’t want to listen. Stupid kids ruined the whole celebration for me.

But then something else happened. A guy with his daughter zoomed past us on his scooter. He turned the scooter, drove to us and stopped. I still was furious so I started walking away from them. While I was walking he asked Dovydas if he could put some colours on him. All three of them greeted each other. And then the guy with his daughter started going towards me. I saw that he is coming closer but I thought to myself that they better wouldn’t come any closer. But they did. The guy did ask me so politely and so heartily if they could do the same to me. I was going to say no, but as I looked at their faces I saw nothing else but a sincere wish. So I smiled and nodded. 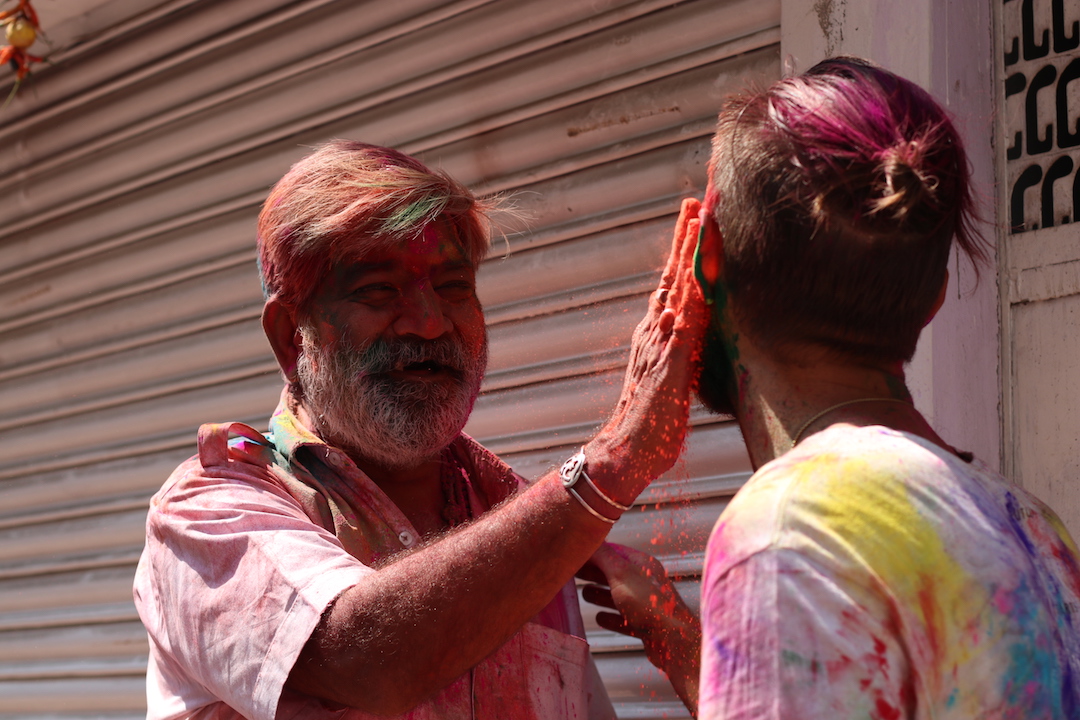 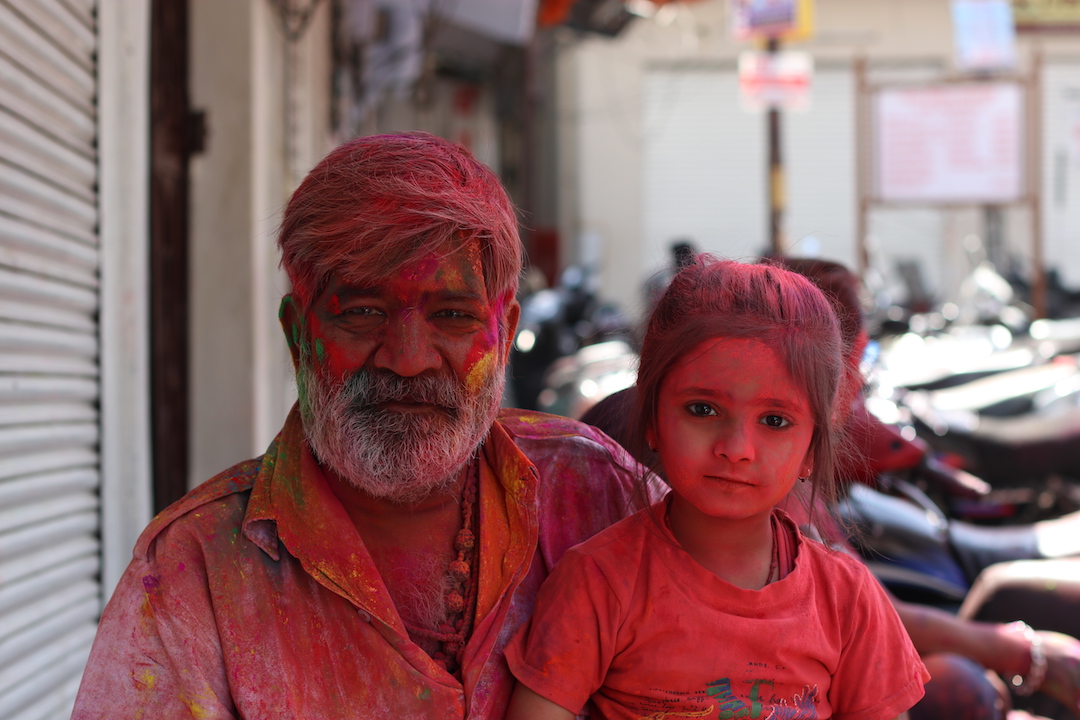 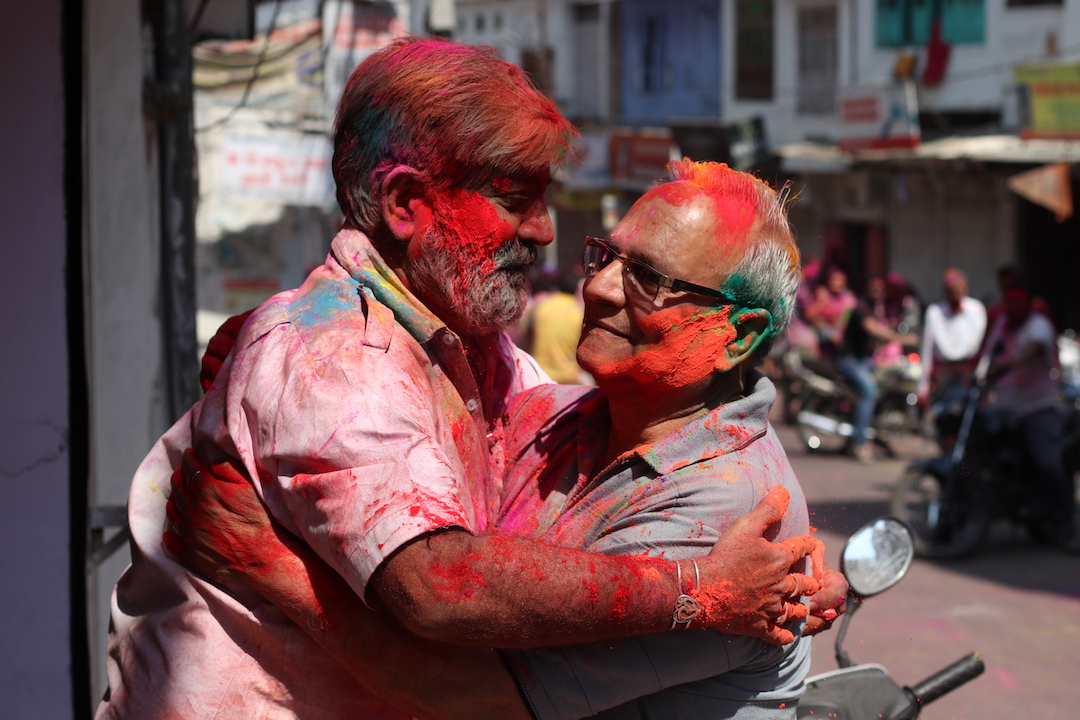 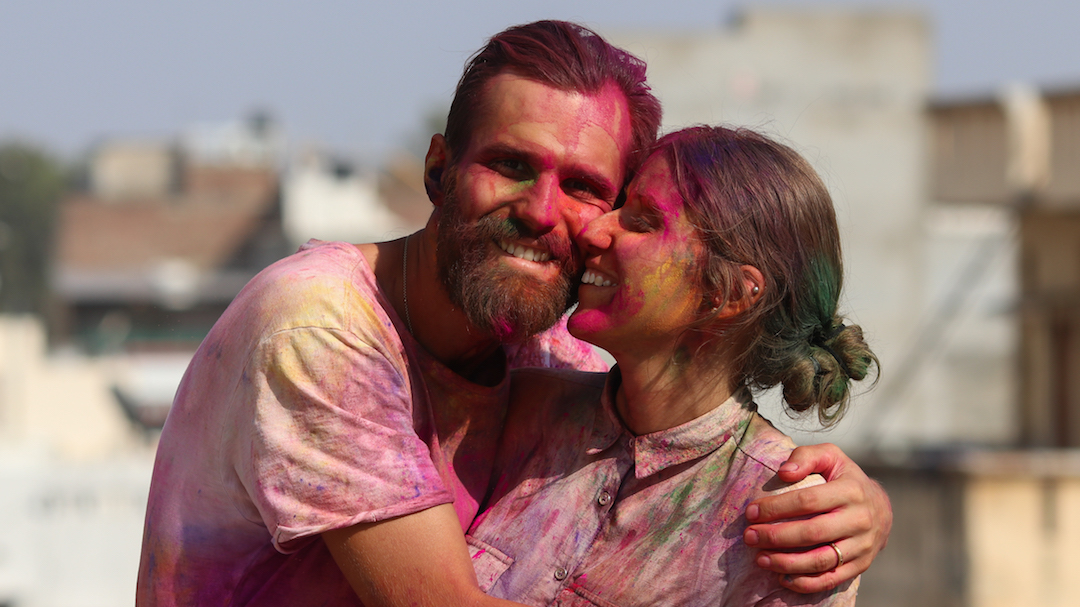 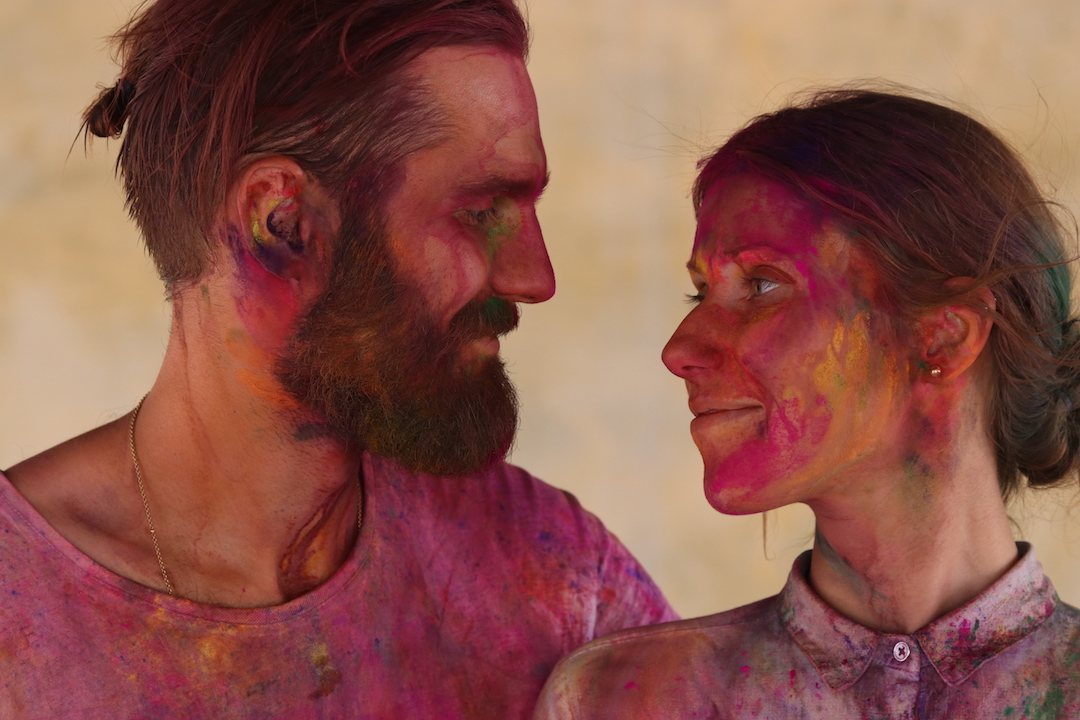 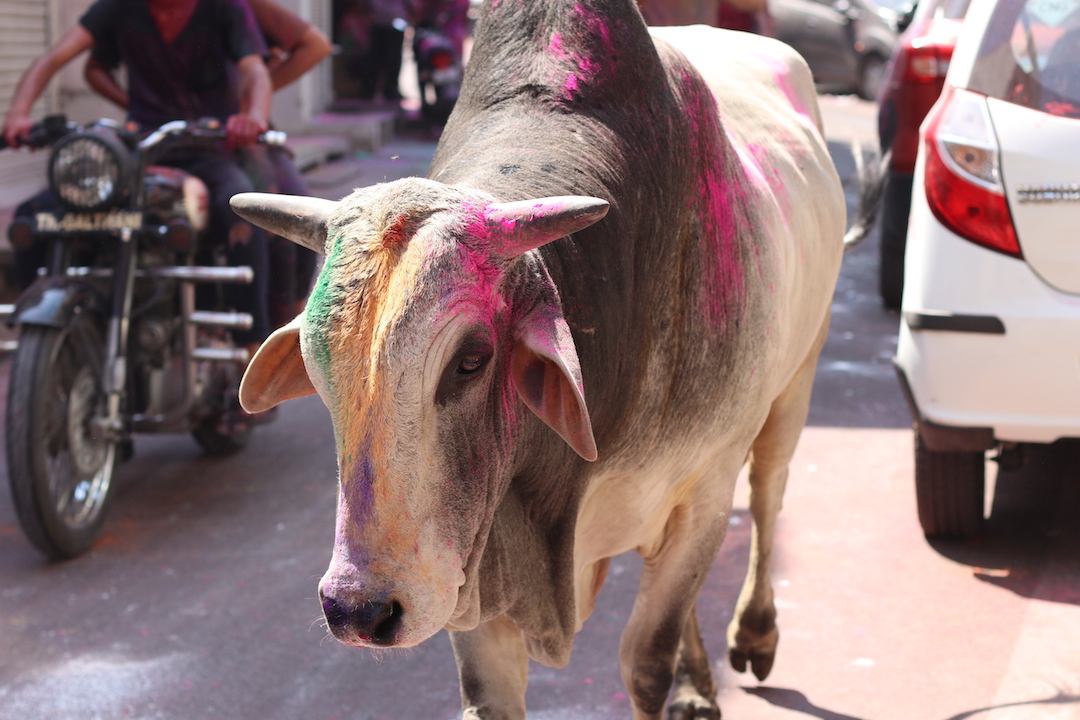