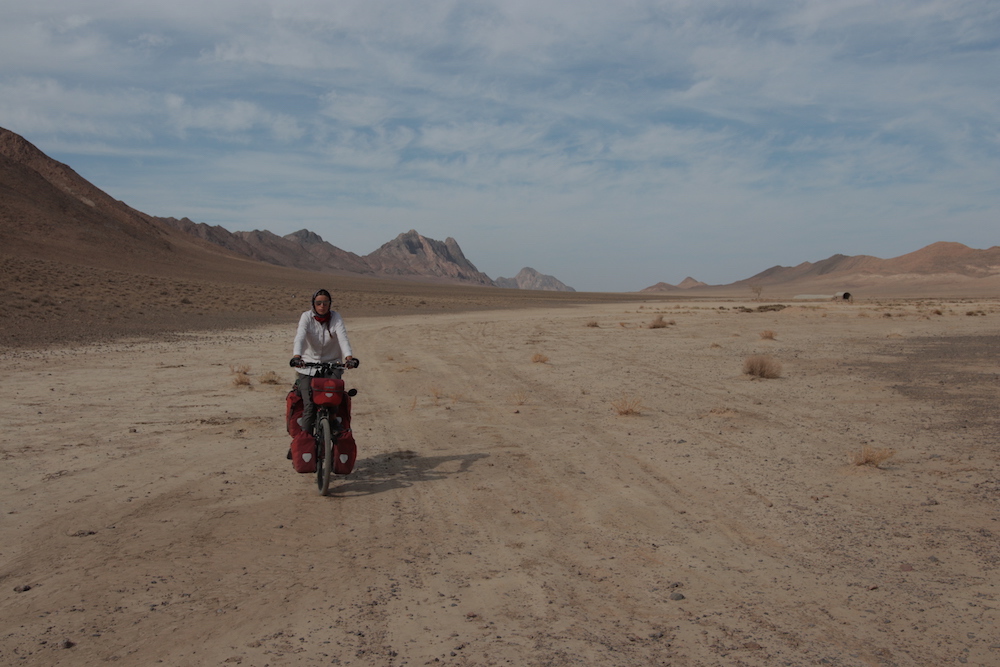 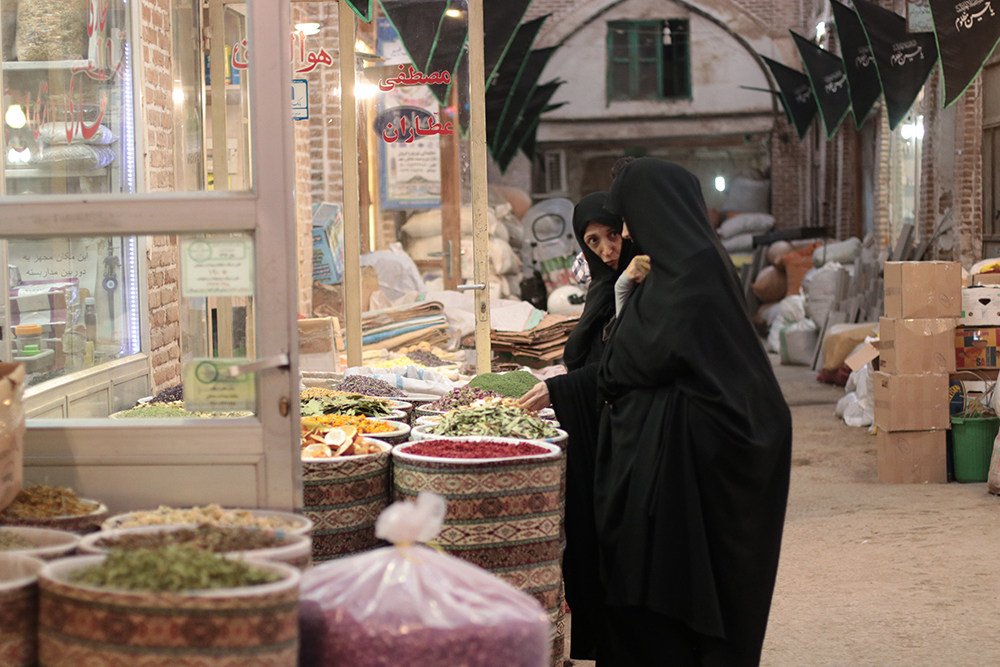 Those wishing to visit Iran should know that clothing restrictions are not only for locals. Every single woman, entering the country, must follow the regulations and wear long sleeves and a head scarf. For me, it was a bit of a puzzle about what to wear so that I wouldn’t go against the rules but at the same time would be comfortable while cycling. Whether you like it or not, you can’t get away with it. We’ve heard a lot of stories about the Islamic religious police patrolling in the main cities and controlling whether women’s wear is appropriate. Even though we haven’t seen any of them with our own eyes, I wouldn’t want to risk and end up in the jail just because I didn’t put my hijab on correctly. 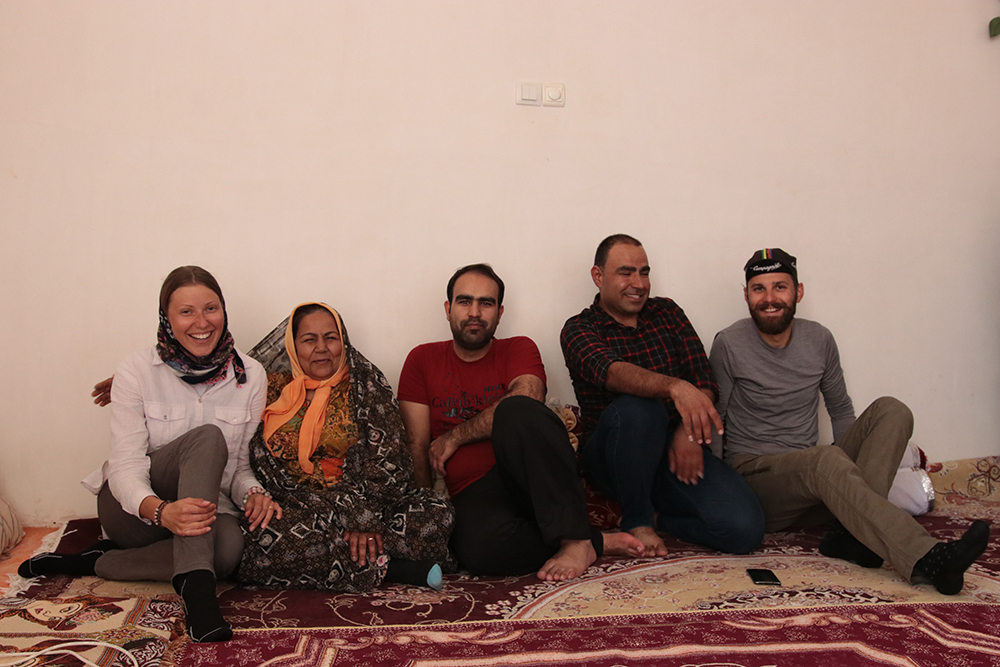 However, it was very interesting to watch how differently some women dress. In small cities most of the people are more religious so women would dress more conservatively. Majority of them would wrap themselves in black chadors. Officially this dress code is applicable in public only, women have a right to dress however they want while at home. On the other hand, religious women would never take off their hijab if there was anyone else here, beside their family members. There have been times when we were invited to stay with families and the hostess would wear chador even at home. The reason behind this behaviour was Dovydas, the outlandish man. In homes like these I wouldn’t be allowed to take off my hijab either. So that men of the family wouldn’t see what they shouldn’t be seeing.

In the beginning I imagined that only older ladies preferred to wear chador. But during our stay in Iran, we met a lot of young girls and some of them surprised me a lot. One seventeen year old told me she loves wearing chador. When she puts on her chador she instantly feels secure and she’s not afraid to get out to the street where potentially some men could be looking at her. I was quite perplexed about her statement and didn’t quite know what to say. Wearing a chador doesn’t necessary save you from nasty stares. 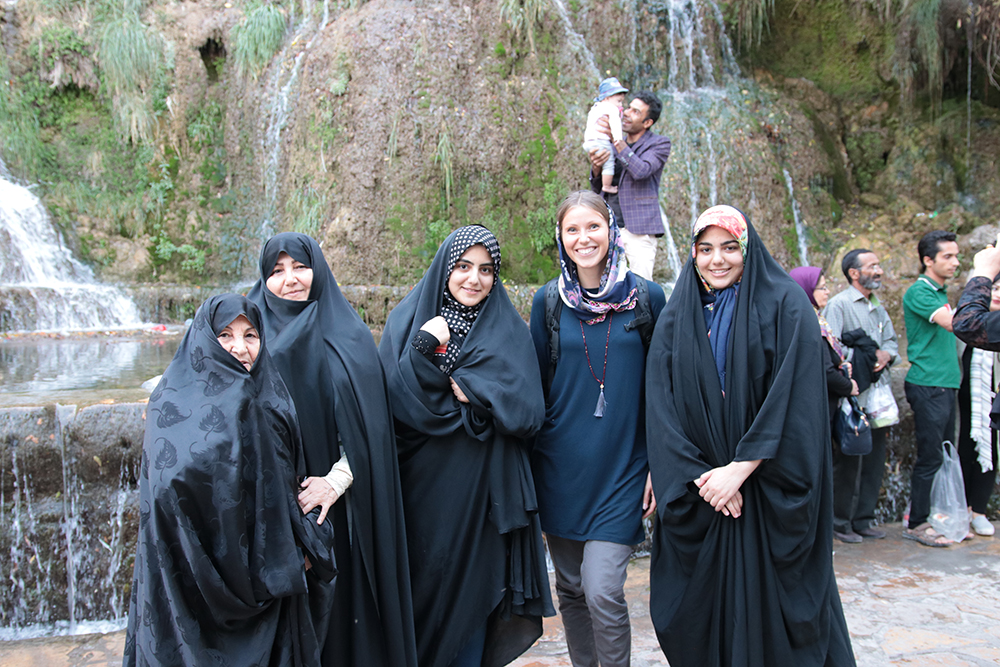 I did meet some girls who couldn’t care less about all the islamic rules. They put their scarves so carelessly that the weakest gust of wind could blow them away. We were invited to join one family on their holidays in Iranian island Qeshm. Whenever the would be a chance, the ladies of the family would take their hijabs off. Whenever they would be in the nature with not that many people around, they wouldn’t care about the scarves at all. They would only become more cautious in the towns. And even if the scarf slipped off, none of them rushed to fix it. Shorter sleeves and generously rolled up trousers is a norm for them. 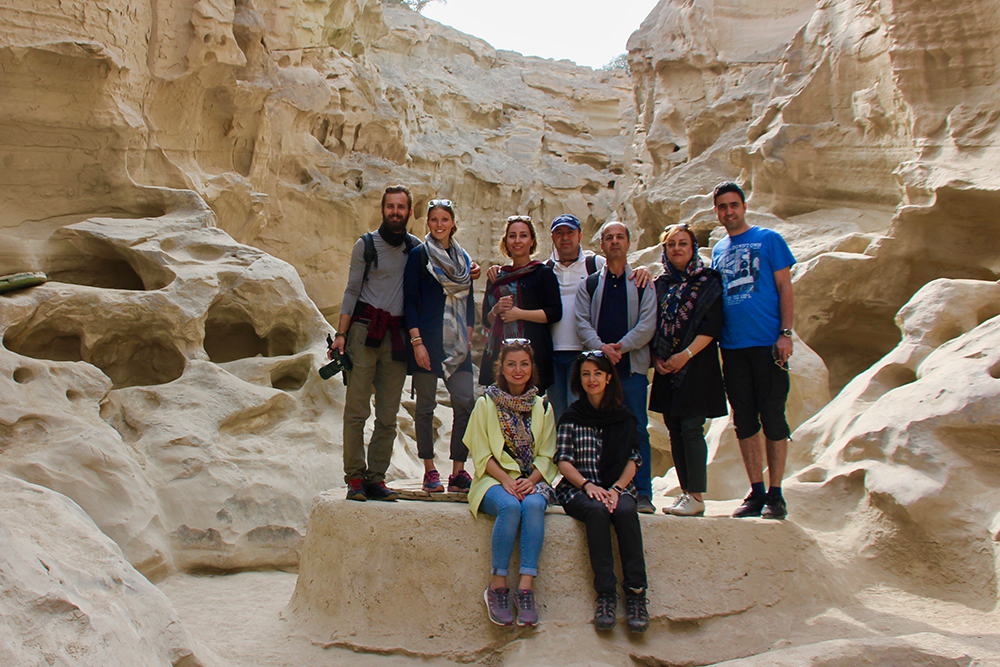 While in Tehran, we stayed with a lovely retired teacher and her son. As soon as we stepped into her house she started going around me telling me to take off all the layers. At some point I thought she will undress me herself. Shahnaz used to work as a teacher so her dress code was quite strict. However, at home she wears short sleeve T-shirts. Only when she need to go out does she become a muslim. We stayed with her and her son for few days and every time she was going somewhere, she would turn her transformation into a small performance. She would put on her sheer black trousers over her thin coloured ones, would put on matching manteau – a coat which fully covers the bum. And finally she would put her black hijab on, with sweet little voice saying how good Shahnaz is, what a good muslim she is. It never was boring with that lady. 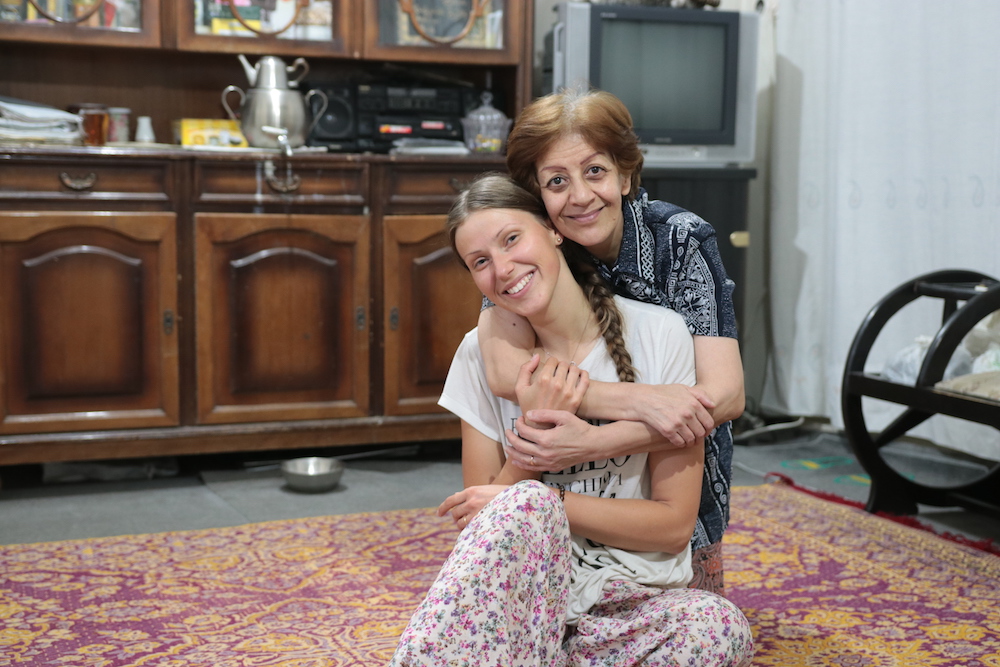 Before we started our trip I was very keen to see this country as I read a lot of things which made me want to go and explore Iran. The only thing which bothered me a lot was the requirement for special clothes. I was quite angry about it until I realised that no one is making me go there. I wanted to see the country on my own will, hence I have to respect the local traditions. After this realisation everything become much easier.
It was October when we entered Iran. It wasn’t warm at all as we entered on the Western side which is the most mountainous part of the country. Furthermore, the border crossing is in almost 2 kilometres above sea level. For couple of days when we were so high in the mountains I didn’t complain about the scarf at all. On the contrary, I was snug and warm with it under my cycling helmet. 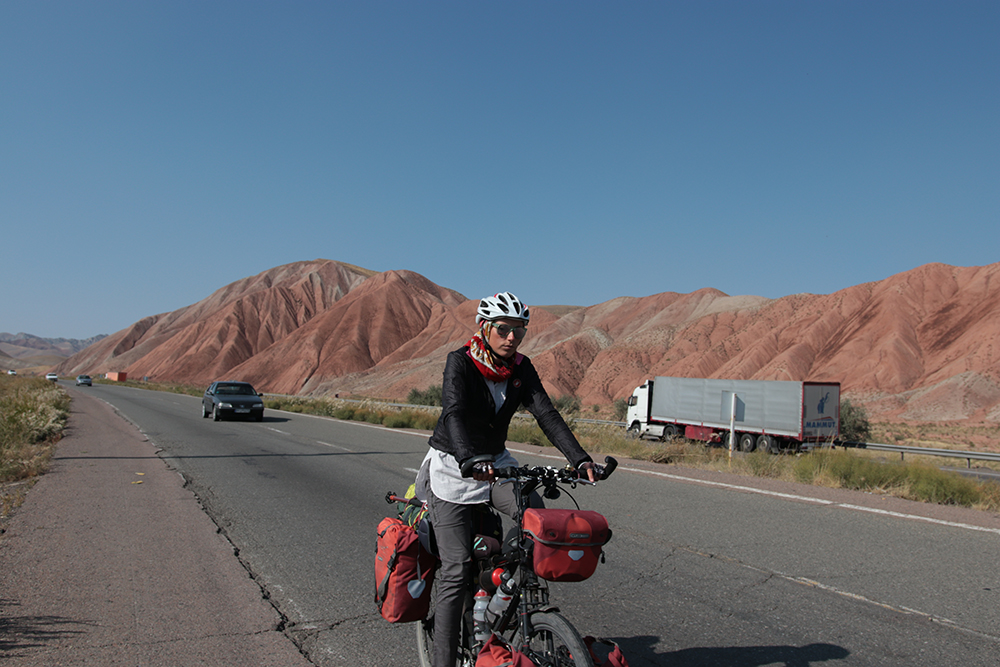 Looking back, I think I was a bit paranoid about the scarf for the first couple of weeks. I didn’t dare to take it off even when we were wild-camping. What if someones walks by and sees me without it? What will happen? But the weeks were passing by and I got more comfortable with the hijab. Started to be more relaxed when and how to wear it.
I did meet a lot of girls who would eagerly ask for my opinion about the hijab. I was always very honest with them – in the beginning I didn’t see any problems with the scarf. I’ll be out of the country soon and then I could forget about it. I think majority of them understood me but maybe they were still expecting a different answer. Now, when I am out of the country, I start to think maybe they just wanted my support because they’re not leaving anywhere, they will have to live with this. 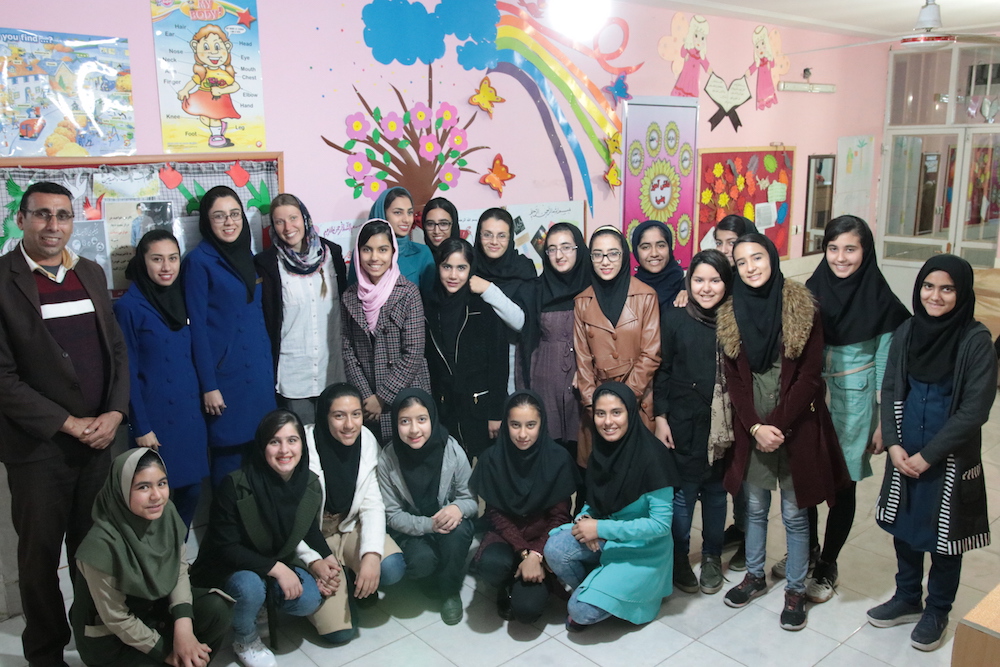 The further South we cycled, the harder it became for me. It was getting hotter and hotter and I started to feel more irritable that I have to wear not only a head scarf, but also long trousers. On hot days without even noticing I would complain to Dovydas quite a lot. He’s lucky – he could even get away cycling with shorts. Now I think that it wasn’t only the heat but also the length of our trip. We never planned to stay there for so long. 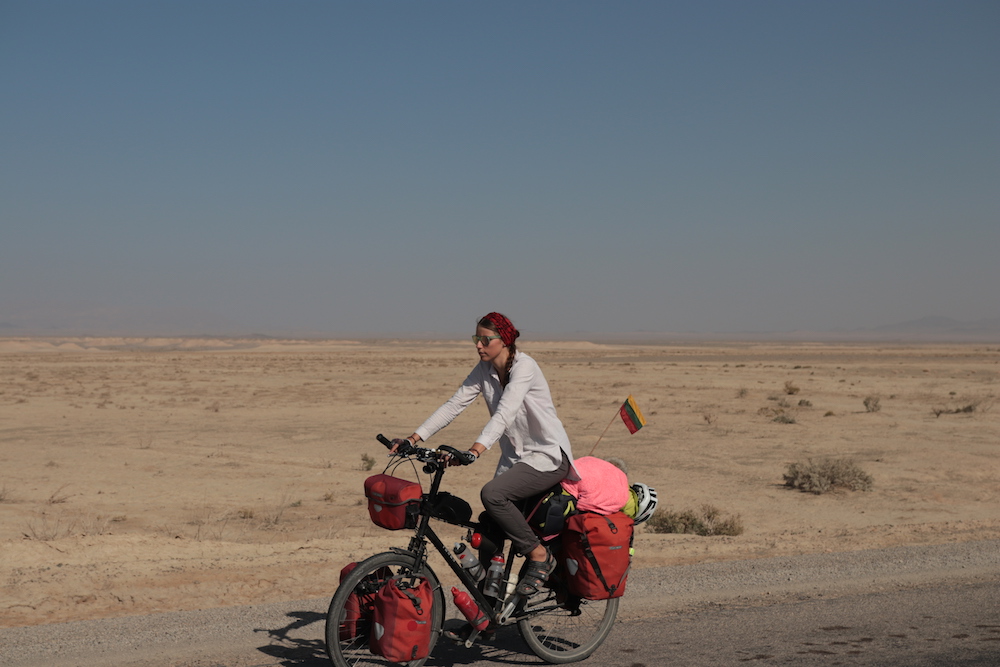 We’ve spent three months in the country. Towards the end of our trip I started to feel when and how I can cheat with the hijab and my clothes. In the big cities I started to feel more comfortable with shorter sleeves. I started to wear my scarf more loosely. Leaving bigger part or the head and neck uncovered. I even started not to wear a proper hijab in more remote places, like deserts or mountains. I would wear a baseball cap or a head band. However I would always have my scarf somewhere handy. Just in case we arrive at a village. 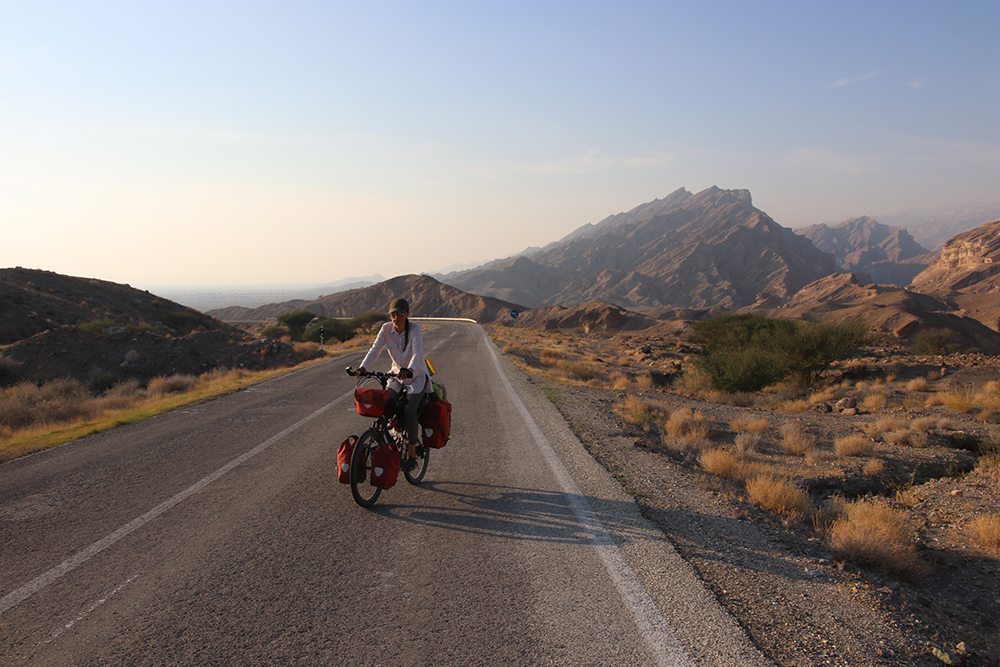 In the beginning I didn’t mind wearing scarves at all. But the time was passing and it started bothering me quite a lot. At that point I started to test how tolerant Muslims are regarding foreigners and hijabs. Iran is a country with a lot of regulations and rules which I don’t like or agree with. However, this country and its people left me truly impressed and I enjoyed exploring it. At the same time, I am extremely grateful that I don’t have to wear hijab anymore. I am grateful that I can choose by myself what to wear and what not to. I am happy that I have the opportunity to wear the shortest skirt or the smallest bikini that i can find. It doesn’t necessarily mean that I want to. But to have the possibility to choose is priceless. I do feel for Iranian women who are forced to wear clothes which they do not want to wear. I do hope that one day they will have the freedom to decide for themselves. And I do hope that this day will come sooner than later. 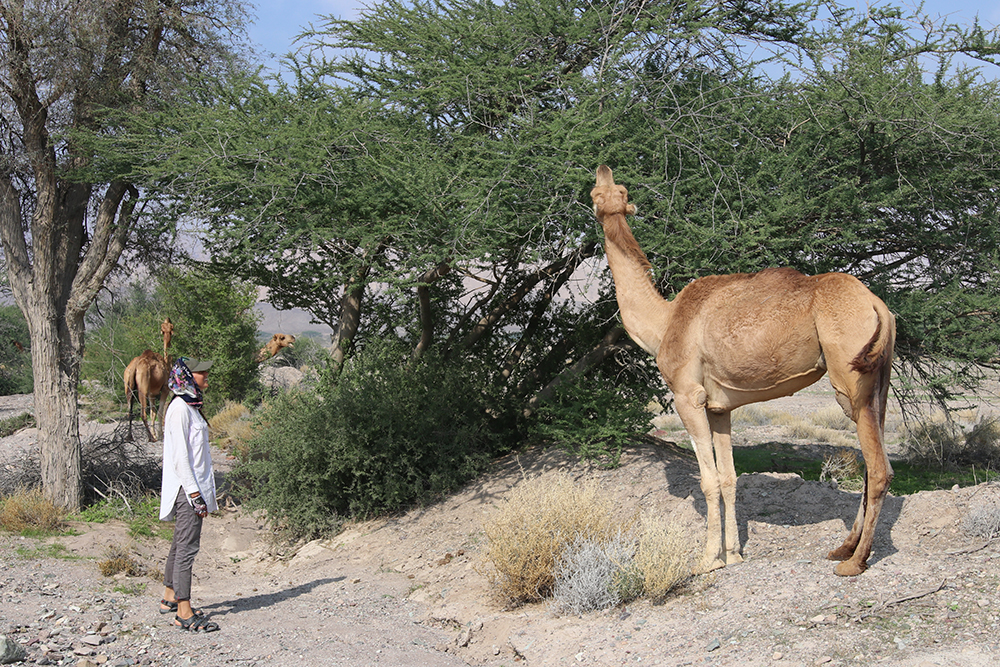 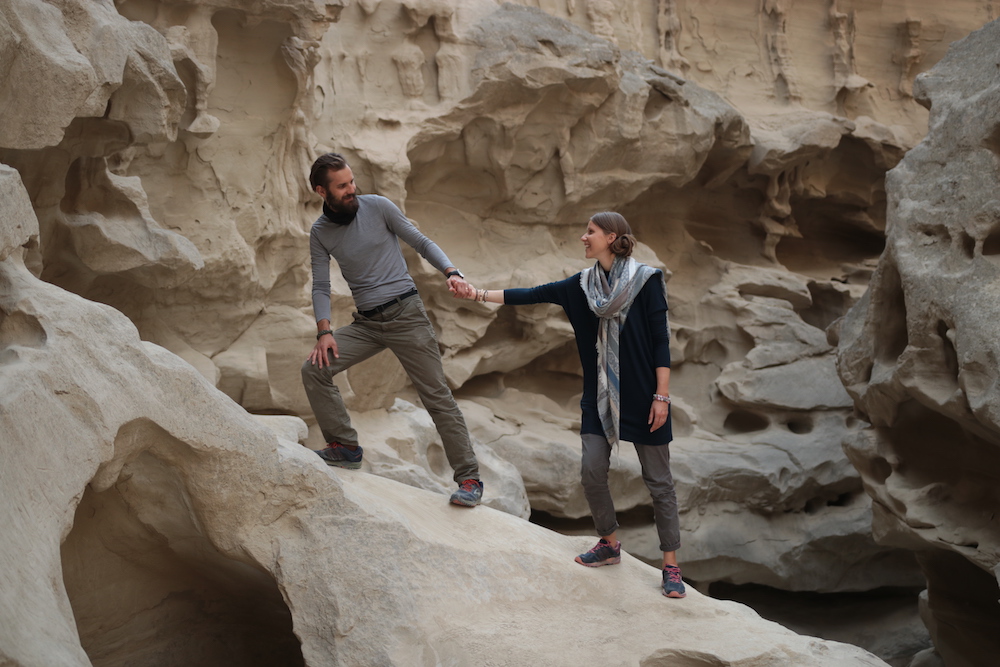